Controlling light–matter interactions with materials structured at micron/submicron length scales has been predicted as the basis for enhancements in the performance of a range of technologies, including optoelectronics, photovoltaics, sensors, and solid state lighting devices. Particularly, enhanced properties have been demonstrated in periodic dielectric materials (photonic crystals) including low loss waveguiding for optical circuits, low threshold lasing, coherent LED emission, and superprism beam steering effects.  The optimization of several design parameters such as the lattice constant, optical absorption, filling fraction of materials (ordered porous structure), and high refractive index contrast between spatial regions enable these strong effects. The crystal structure and the shape and complexity of the photonic crystal basis also strongly influence the capability of the patterned materials to exhibit features such as complete photonic band gaps analogous to electronic bandgaps in semiconductors.  The development of inexpensive processes to generate tunable structural complexity in functional materials is paramount to accessing the new frontiers in light–matter interactions for such applications.  Because of its relative ease and potential for high volume manufacture at low cost, colloidal self–assembly is an ideal fabrication process.  However, the types of thermodynamically stable structures from simple building blocks, such as colloidal spheres, are limited and interactions which are often rather complicated have been pursued to direct their organization.

Our approach has been to employ non–spherical colloidal particles to dramatically expand the symmetry and topology that can be achieved using self–assembly, ultimately allowing a much more extensive probe of the relations between unique photonic properties and mesoscale structure. 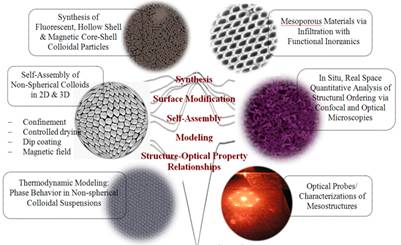 Our aims were developed recognizing that anisometric particle suspensions have notable analogy to molecular systems, where the shape of molecules and their packing density has been shown to critically influence structural phase behavior and lead to a rich diversity of structures in nature and in synthetic materials. Adding non–spherical shape to the handle of colloidal interactions produces many types of experimentally accessible structures beyond sphere close–packing. However, experimental attempts to organize non–spherical colloids often result in amorphous deposits or cases where the correlation in particle positions decays rapidly. The challenges have been in [1] attaining sufficiently monodisperse (size uniformity) colloidal building blocks, as well as [2] the lack of understanding and control of self–assembly processes for non–spherical particles in the size range between 100 nm and a few microns (a size regime relevant for light control).  Our work spans the areas of:

Understanding the influence of particle shape on self–assembly